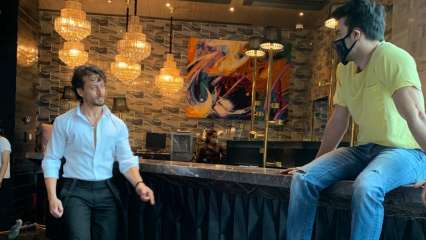 Tiger Shroff’s singing debut ‘Unbelievable‘ is all set to be unveiled on Tuesday. The music video is directed by his Student of the Year 2 helmer Punit Malhotra. The filming was done during the coronavirus lockdown with utmost precautions undertaken by the cast and crew. Now sharing his excitement on working with Tiger after a year, Punit revealed it was the actor who called him to develop the music video.

Punit stated, “I wasn’t surprised when Tiger said he has sung a song; he has a lovely voice. I was kicking myself because I should have displayed his singing skills in Student of the Year 2.”

Malhotra further shared, “Initially, we were scared at the idea of going back to work. But once we did, it felt like a reunion of old friends. As the director, I was doubly vigilant and adopted safety measures over and above those stated by the government. Tiger Shroff was a source of support. His constant reassurance ‘Punit, we will get by this’ helped me.”

Talking about shooting with 40 crew members, Punit revealed that they shot at a hotel in Lower Parel for three days. He added, “Since the hotel was in lockdown, it was the most sanitised place we could have shot at. We chose a theme that didn’t need a big team. At the same time, we ensured we did not compromise on the scale. We explored a tender romance between two hotel staff members.”

Tiger’s fans have been trending ‘You are unbelievable‘ on Twitter.

Baby with COVID-19 antibodies has born in Singapore