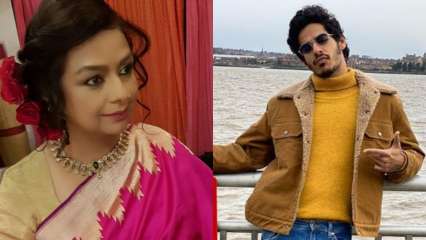 Actor Ishaan Khatter recently took to his verified Instagram handle to pen an emotional note for his mother Neliima Azeem who made a guest appearance in ‘Dolly Kitty Aur Woh Chamakte Sitare’ that was released on streaming platform Netflix on Friday.

Taking to his account the ‘Dhadak’ actor wrote that he got extremely emotional on seeing his mother on screen, even though it was just for a one scene. The actor lauded his mother for her ‘humaneness’, ‘delicateness’ and said that he was moved to tears when he saw that scene in the film.

He added that he ‘cried like a baby’ after watching his mom in the critically acclaimed movie and extended best wishes to the entire team.

Ishaan wrote, “I saw my mother on screen today in #dollykittyaurwohchamaktesitare. You are beautiful as ever mom. Such intricacy and delicateness. Such humaneness. I can’t explain what watching this single scene did to me. I cried like a baby after watching it. It’s always lovely to see wonderful people coming together for a film but this time it’s personal. My mother made an appearance for one scene and moved me to tears. Best of luck and congratulations on the release to the entire team of the film @alankrita601 @bhumipednekar @konkona @vikrantmassey87 @aamirbashir and all others! @neliimaazeem on @netflix_in(sic).”

Ishaan Khatter’s film ‘Khaali Peeli’ in which he will be starring alongside Ananya Pandey, faced backlash for their song ‘Beyonce Sharma Jayegi’, the lyrics of which were alleged to be rascist.

Later, the makers decided to change the name of their ‘Beyonce’ song to ‘Beyonse Sharma Jayegi’.

The ‘Khaali Peeli’ track came under the scanner for its hookline – ‘Ho tujhe dekh ke goriya, Beyonce sharma jayegi’. The word ‘goriya’, especially, was a huge trigger, because American pop superstar Beyonce, of African American origin, is dark-skinned. The song was thus called a racist dig at the singer, and did not go down especially during a time when movements like ‘Black Lives Matter’ try to enlighten people about being less racist.

The film is scheduled to premiere on Zee Plex and ZEE5 on 2 October 2020.